Taking the Myth Out of Transmedia

When one of the speakers backed out of our event 'UPGRADE: Building a Creative Career in the Digital Age' last week, I started making notes in case I needed to give the speech himself. Luckily a replacement speaker was found, but rather than waste the prep work I'd already done, I decided to turn it into a vlog. It's basically a short talk in which I aim to take the myth out of transmedia and get people thinking about how they can maximise creativity, audience engagement and revenue potential. Here's the video, but for those who prefer to read rather than watch, I've included the key points in text form below. (We'll be back to our more regular type of blog/vlog posts later this week).

What is 'transmedia'? Also known as 'cross-platform' or 'multiplatform', 'transmedia' is a word used to refer to the practice of telling a story across multiple platforms and formats. An example of this would be The Matrix Reloaded, which used transmedia storytelling in two distinct ways: 1) they expanded the story itself across different media (the film and the computer game, Enter The Matrix), and 2) they used different media to expand and enrich the universe that the film takes place in (by telling other stories – in both comic books and animated shorts – set in the world of the film).

While you may not have the resources to work on a scale as large as that of The Matrix, that doesn't mean you can't think in cross-platform terms when conceiving projects: even something like a Twitter account set up and run in-character can be effective. Indeed, the possible platforms are endless: social media sites, live-action games, computer games, widgets, mobile phones, films, web shows, TV shows, live events, merchandise, websites, DVDs and comics are just some of the platforms you can consider to help tell your story.

Filmmakers have to acknowledge that the way audiences are consuming their work has changed: the sanctity of the cinema is not what it once was. Technology and the hyperactivity of the modern age have shattered it. Once this fact is acknowledged, the next step is to try and understand it and, more importantly, to try and turn it to our advantage.

Although it's true that genres like science-fiction may, in some ways, offer more obvious opportunities for a transmedia approach, it doesn't mean that opportunities aren't there for non-genre based projects too. For example, when we were in the development stage on Life Just Is, my producers and I had several conversations about the possibility of making a webseries to go along with the film. Consisting of five or six episodes, each episode would have focused on one of the film's lead characters and explored their lives in the run up to the moment at which the narrative of the film begins. In other words, the series would have offered a further emotional and psychological insight into the characters in the film by exploring some of their backstory. In addition to considering the webseries, we also discussed the possibility of telling these stories in comic strip form. Although the prequels didn't ultimately come to fruition, I was excited by the creative possibilities that they offered: as the writer/director of a film which focuses intensely on the lives of its characters, the opportunity to explore them in even greater detail was something that appealed to me.

The reason why we never took the idea of the prequels beyond the development stage was simply down to budget constraints, and when conceiving transmedia projects you will need to think about the cost of each of the different elements, not only in terms of finance, but also in terms of time.

However, while transmedia projects may well require a bigger outlay, it's also true that, potentially, they offer a greater capacity for revenue return: simply put, by creating multiple works, you have multiple products which you can monetise. And this is a key point to remember: each element you create has value within itself.

Another important consideration in conceiving a transmedia project is to think about how your audience is going to travel between platforms, and this needs to be thought about in terms of both the physicality and psychology: for example, how are they going to move from the cinema to the internet and, more importantly, what is it that is going to make them want to make that transition?

Here, perhaps, is where genre helps. Mystery aspects are a good way to hook in an audience, as is mythology: think about the buzz which surrounded The Blair Witch Project when it came out, another film which can be said to have utilized transmedia elements: again, they used the medium of comics, but they also made a television mockumentary – The Curse of the Blair Witch – which expanded upon the world of the story and made you want to know even more about it.

The use of the word 'expanded' here is key. If you want your viewers to actively engage in transmedia content, the work needs to add value to the story you're telling. It shouldn't just serve to promote a central product, but should genuinely help enrich the world and/or the characters of your story, because ultimately creating a world or characters that people want to find out more about, that people want to get to know, is going to go a long way to encouraging them to travel between platforms and seek out the further branches of your project.

Another point to remember is that not all audience members will engage with your project in the same way, so you really need to think about the way in which people will be consuming your work. Again, The Matrix Reloaded serves as a good example: half the storyline of the film was being told in other media, so viewers who weren't engaging with the project across the multiple platforms were only getting half the story. Literally. So you need to make sure that your project isn't alienating to people who only want to dip in and out, or to engage with it on only a single platform. But you also need to make sure that it's engaging enough for the viewers who do want to see everything.

One final aspect of the transmedia user experience that shouldn't be overlooked is the desire for interactivity: sitting back and watching as a passive viewer is no longer enough for many people. In his keynote speech at the Power to Pixel conference in 2009, film producer Ted Hope said that 'we have to go from giving the audience a monologue to having a dialogue with them', and many audience members do now have a desire to contribute back. Story Architect Lance Weiler has spoken about how audiences should be seen as collaborators, while Hope spoke in his keynote about seeing ourselves as enablers, not creators: we need to look at ways in which the 'crowd' can contribute to our work, and not be afraid to let our viewers create on the same level as us: why not allow the user to become the co-creator, and therefore the promoter, of our work?

There are many ways to encourage audience participation, from remix competitions to fan-fiction to crowd sourcing ideas. (For those of you who don't know, crowd sourcing means asking your followers to contribute ideas, storylines, or designs – or whatever – to your project, usually through an online community). Of course, co-creation is only one form of possible interactivity, and things like games or comment boards also invite audience involvement. But whatever approach you take, it's by turning the viewer into an active participant that you can achieve the highest level of audience engagement.

A few photographs from 'UPGRADE: Building a Creative Career in the Digital Age', the event that we put on earlier this week in association with Student Film Festival London. Photography by João Serejo. 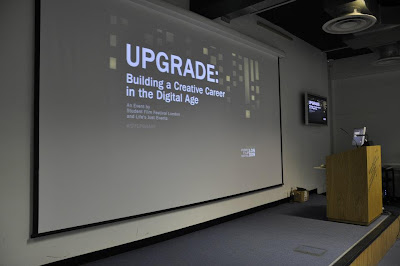 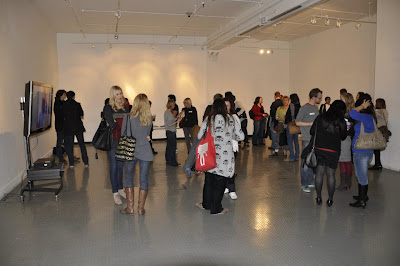 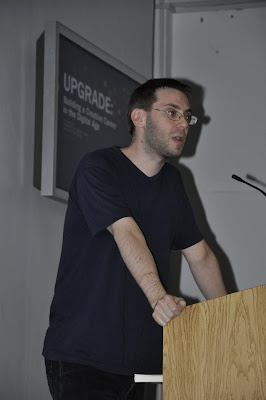 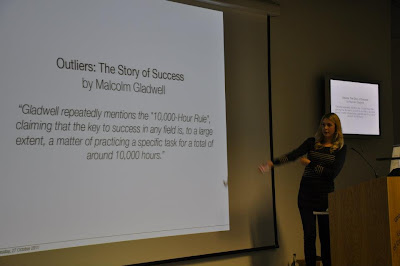 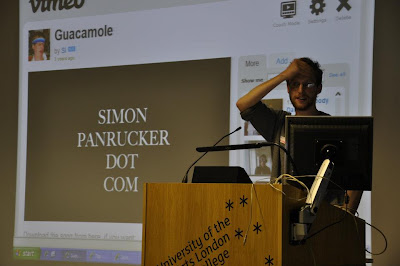 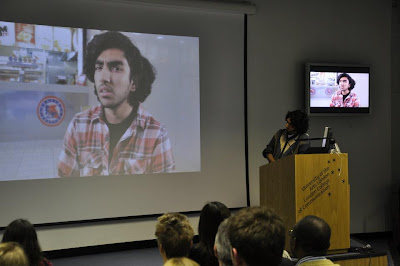 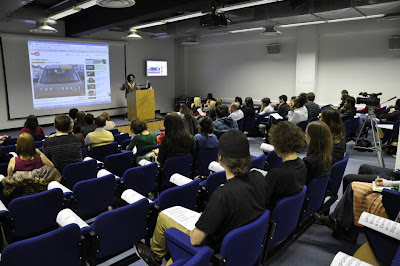 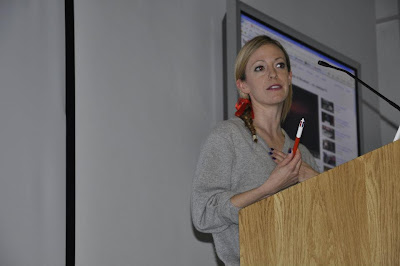 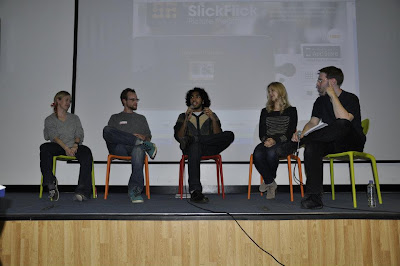 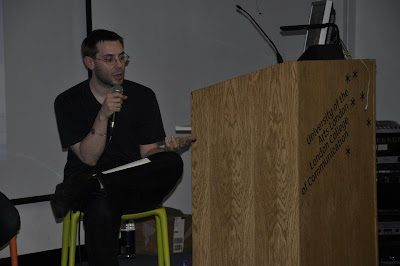 Alex Barrett during the QA.
Posted by Life Just Is at 14:41 0 comments