A Small Update and Some Photographs

Since our last update, Tom and I have been continuing work on the project, and things are moving in the right direction. As well as approaching financiers and continuing our fundraising activities, we have been approaching several bands whose work I'd like the characters to sing during the film. The idea behind these references is to help situate the film in the real world and, at times, to comment on the action of the film through the song's lyrics. Although I feel it's a bit early to be announcing who the bands are, so far things have been progressing well and we've been met with a huge amount of kindness and generosity. I'm also particularly excited to be able to include the work of these bands in the film as they are all among my lifelong favourites and have therefore no doubt helped in some way to make me who I am, which, in turn, has made the script what it is.

We have also been having some meetings recently with an eye to expanding our production team, and have now officially started the casting process and hope to hold auditions in the next few months. More details on both of these points will be announced as things progress. Meanwhile, our executive producer Christine Hartland is currently in Cannes, where she will be promoting the project and looking for investment. If anyone reading this would like to arrange a meeting with Christine while in Cannes, please don't hesitate to drop us an email on info@lifejustisfilm.com.

Finally, a big thank you to those of you who came down to The Duchess last night. It was another great evening and I'm genuinely touched by the feedback that you've been giving. We'll be back in June, so please check the website for details. In the meantime, I'll leave you with some snaps of the filmmakers speaking at last night's event.
- Alex 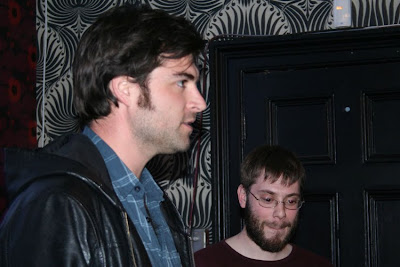 Writer/Director Will Kenning (left) talks about his film Road Kill 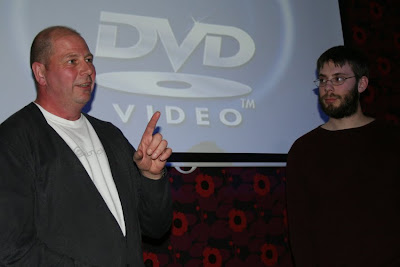 Director Nick Reed talks about his film After 8 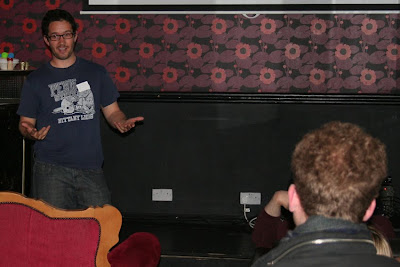